Being a SAHM (stay-at-home) I’m always on the hunt for inexpensive/affordable activities to help keep the kiddos busy and me sane during the summer…If you follow me on Facebook (and I hope you do) then you may have seen a post earlier this week mentioning the Passport to Imagination Craft Adventure at Michael’s. I was thrilled when I discovered it…

Michael’s Passport to Imagination is a 7-week crafting class for kiddos. The “2-hour crafting adventure takes place every Monday, Wednesday and Friday from 10 am to noon” at your local Michael’s Store. And it’s just $2 per child per session. The crafts are designed for children ages 5 and up. Like I said I was thrilled…it’s affordable, offered several times throughout the week and indoors away from the scorching heat.

Be sure to pick up your Passport to Imagination Guide Book next time you’re in Michael’s.

I immediately checked out the Travel Itinerary for the Passport Imagination and I couldn’t wait to take my boys! But my youngest is just 3 years old and class was for kids 5 and up. If you have kids then you know that no one can be left out….so I called ahead to my local Michael’s store to see if it would be ok for me to sit in with my youngest to help him with his craft and they said that it would be fine. WOOT! Be advised that I’m not sure if that’s the norm for all locations so be sure to call ahead first if you too have a little one under the age of 5. I decided that today would be a great day to do, it’s week two of Passport Imagination and Michael’s headed to South America. The craft today was something simple and not to girly, perfect for my guys….

My oldest busy crafting his vase.

This guy is so creative!

By youngest trying to keep up.

Some of the kids’ crafts

My boys had a blast! And the instructors were amazing! I’m so glad that we went on today, we will definitely be going back. Like I mentioned it’s Week 2 of Passport Imagination, so that leaves 5 more weeks of crafting fun. If you still on the hunt for something fun and affordable to do with your kiddos, I highly recommend that you check out Michael’s Passport to Imagination!

Have you checked out Michael’s Passport to Imagination? What summer fun activities do you have planned for the kiddos? 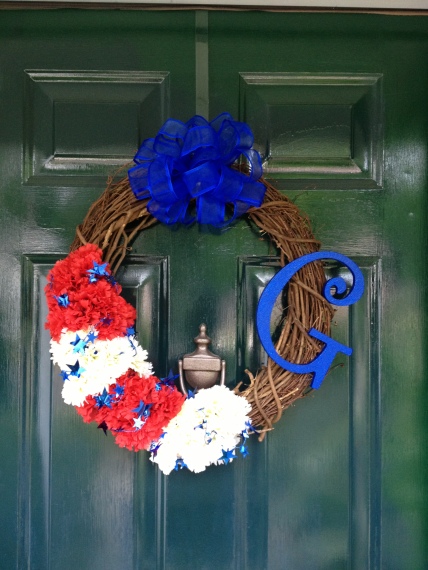 So lately I’ve been going DIY crazy! Who knew that doing crafts could be so fun and rewarding! Not to mention it’s an awesome stress reliever…for me anyway.

Of course this DIY was inspired by something I saw on Pinterest. A few weeks ago I came across a really cute wreath made with clothes pins painted to resemble the American Flag. After reading the instructions, I decided that I was going to give it go but as the days passed I realized I didn’t have much time if I wanted to have the wreath up before Memorial Day. So I headed to Pinterest again….after checking out a few patriotic wreaths I decided to combine a few ideas from the ones I liked the most and create my own.

Like I said I didn’t have much time, so I wanted to keep things simple. So instead of hand-crafting fabric flowers I went with artificial ones from Micheal’s. Luckily they were on sale for $.99 each (with 5-6 flowers per stem) and I was able to pair it with a 25% off your total purchase coupon..woot! I also purchased my wire ribbon from there too. And the grapevine wreath was purchased from Hobby Lobby…using the 40% off coupon of course.

Mod Podge + blue glitter…used to give the wooden letter some extra pop!

All dry with glitter. 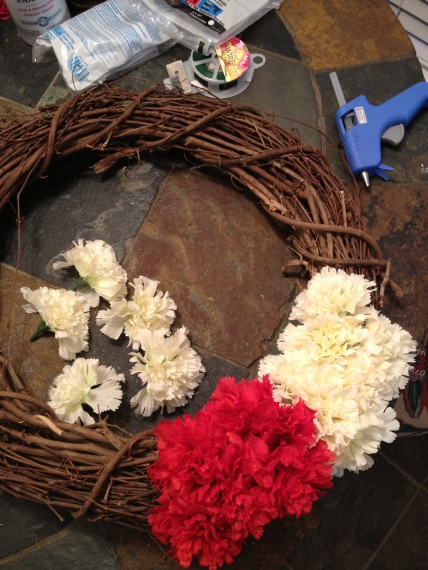 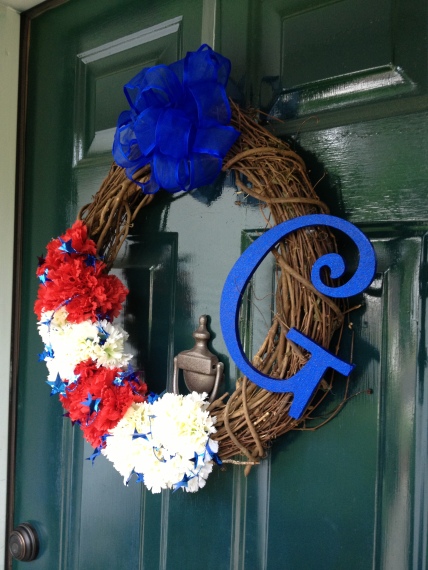 I think the “G” looks a little crocked but other than that I love it! The hubs suggested adding some blue flare to the flowers to make them pop and he was right! I’ll be using this wreath for the 4th of July too. What do you think?

Have you tried any of the things you’ve pinned lately? What things do you do to help relieve stress? Do you enjoy crafting?

The Savvy Life on Twitter…@ChicRoni